Despite about two months have passed since Russia's military invasion of Ukraine, fighting is still ongoing. As a result, the price of crude oil is moving currently in the range of 100±10 dollars per barrel on a WTI basis even after a sharp rise due to concerns about the possible stagnant supply of energy resources. Since Russia and Ukraine, parties to the war, account for a total of 30% of the world's grain exports in wheat and 20% in corn, this has also had a significant impact on grain prices. However, if there is no destruction of new crude oil facilities or expansion of fighting in Europe, the rise in crude oil prices can be considered to hit the highest in early March.

According to the EIA (U.S. Energy Information Administration) April forecast, the March estimation indicates a surplus of approximately 1 million barrels per day in terms of production vs consumption situation, and from April production is expected to remain in excess of 500,000-700,000 barrels per day. If this situation continues, inflationary concerns by the oil price will be resolved. 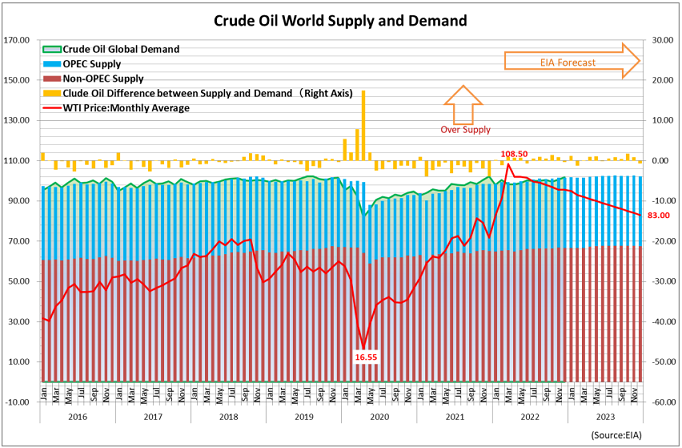 In addition, the current level of energy prices, which have been rising, suppresses demand as a matter of course. The IMF's World Economic Outlook, released on April 19, 2021, forecast global growth of 3.6% in 2022, from 4.9% in the October release. As an example, the forecast for the U.S. is 3.7%, but the Economist magazine's April forecast by its poll was 3.0%, which is a much conservative outlook. The U.S. economy is still in the process of revising its forecast downward, and the global demand forecast for crude oil is also expected to be revised downward. On the U.S. corporate side, as evidenced by the slowdown in the U.S. PMI, signs of a slowdown in profit growth among listed companies have begun to emerge. Although U.S. companies have been at the forefront of the global economy, the S&P 500's 12-month forward EPS forecast (converted into points based on indexes) was 226 points at the end of March and 221 points as of April 22, while the NASDAQ 100 similarly dropped from 570 points to 540 points. There are signs that corporate earnings, which had been recovering at a steady pace since the worst period at 2 nd quarter 2020 when the Corona shock hit, have indeed reached a plateau. Although the stock market has not fallen significantly, the recent slowing momentum is a signal of change in the market trends.

The 10-year U.S. Treasury yield is also hovering around the 3% mark. The FOMC meeting in March set the policy rate forecast for the end of 2023 at 2.75%, and market interest rates have largely taken that level into account. The 10 year breakeven inflation rate have also been peaking at around 3% is a further indication of this. 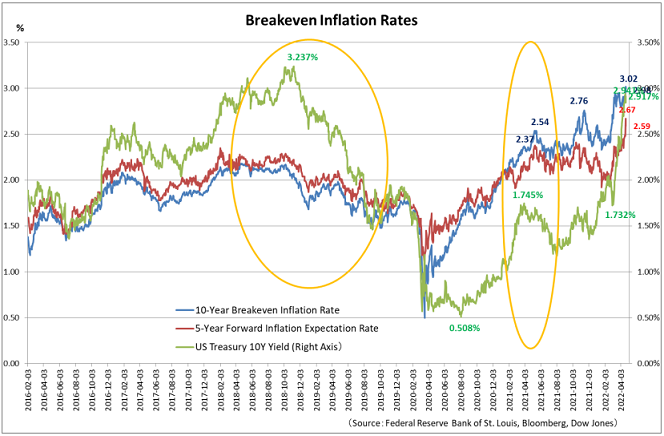 On the other hand, the dollar exchange rate, which had been linked to interest rates, has continued to appreciate. It is natural that the euro, which is so close to the battle zone, is being sold off, but the yen has been sold off even more sharply against the dollar; it is true that the unusual volatility of a two-yen move from a previous day has made it quite speculative. This time, the government and the Bank of Japan have been tested. The theme is to "attack" the gap between directions of monetary policies in U.S. and Japan and rapid increase in trade deficit in Japan. Currently, the Chinese yuan, which has been undergoing monetary easing, has depreciated only 2.3% against the dollar YTD until April 22, while the Japanese yen, which has been maintaining monetary easing, has depreciated over 11% against the dollar. Additionally, the euro, by contrast, has depreciated only about 5% over the same period. In fact, the above theme is a kind of "conclusory" rationale against the easy target. As the U.S. economy may be turning a corner as described above, it will be difficult to continue optimistically buying the dollar. Therefore, there is a possibility that a reaction to the dollar's strength will eventually emerge.

China, which has the second largest GDP after the U.S., is also experiencing a slowdown due to restrictions on economic activities (e.g., the blockade of Shanghai) by the Zero Corona Policy and economic adjustments affected by sizable corporate debts. And in Europe and Japan both businesses and households are showing stagnant in their sentiment indicators. It is time to carefully assess the current changes in the economic front through changes in the prices of goods.