Movement of Oil Majors to Embark on Plastic Recycling Business

ExxonMobil recently unveiled plans to build an advanced waste plastic recycling plant in Baytown, Texas. According to ExxonMobil, the processing capacity of the plant is 30,000 tons per year, which is one of the largest in North America. It is scheduled to start operation by the end of 2022.

ExxonMobil has already successfully tested a new waste plastic recycling process with a capacity of 50 tonnes / day. In the future, it plans to build recycling plants with a total processing capacity of 500,000 tons / year around the world.

“We’ve proven our proprietary advanced recycling technology in Baytown, and we’re scaling up operations to supply certified circular polymers by year-end,” said Karen McKee, president of ExxonMobil Chemical Company. “Availability of reliable advanced recycling capacity will play an important role in helping address plastic waste in the environment, and we are evaluating wide-scale deployment in other locations around the world.”

Shell processes pyrolysis oil with crackers from Moerdijk in the Netherlands and Rheinland in Germany to produce circulating chemicals. The capacity of the first recycling plant under construction, which is scheduled to start operation in 2022, is 60,000 tons per year, and the capacity of the second plant under construction (scheduled to start operation in 2024) is planned to be 350,000 tons per year. 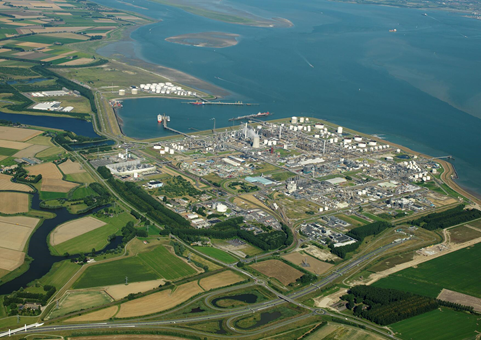 Thomas Casparie, SVP North West Europe, Shell Chemicals and Products commented as follows; “With increasing demand for circular chemicals from customers, our agreement with Pryme enables us to significantly grow volumes as early as next year. The agreement builds on Shell’s ambition to recycle one million tonnes of plastic waste per year in our global chemicals plants by 2025.”

In the plastic recycling business, major chemical manufacturers are leading the way. Recently, information related to technological development has been transmitted.

Haldor Topsoe and Dow announced in mid-October that they had agreed to collaboratively develop plastic recycling technology. (Photo: Dow intends to build the market development unit at their production site in Terneuzen, the Netherlands)

As the first step, the two companies are planning to install a market development unit (MDU) on the Dow site in Terneuzen, the Netherlands.

The MDU has an annual processing capacity of 10,000 tons per year and will use Haldor Topsoe's pyrolysis oil refining process PureStep (TM). On the other hand, DOW aims to collect, reuse and recycle 1 million tons of waste plastic per year as its business goal for 2030.

With the urgent need to take measures against global warming, it is expected that the efforts of the plastic recycling business will continue to expand beyond the boundaries between industries and companies.