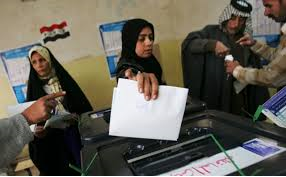 On October 10, the National Assembly general election was held in Iraq for the first time in three years. Iraq is still suffering from chronic terrorism and political and economic crises, 18 years after the collapse of Hussein's administration and four years after the recapture of Mosul from the Islamic State. Since the stability of Iraq's political situation is directly linked to the stability of the region, the election results that will be revealed in the future will be watched. (Photo quoted from Yahoo’s image)

The Japanese media reports that the pros and cons of withdrawing from the US military are the main issues. The turmoil over the withdrawal of US troops from Afghanistan has become a hot topic all over the world, and the pros and cons of stationing in Iraq, where US troops remain, have attracted a great deal of attention. More important for Iraq's whereabouts is what to do with the distance to Iran.

Iran is intervening deeper in Iraq than the United States. Partly because of the pretense of the majority Shiite's "Lord" in neighboring countries and Iraq, there are incomparable difficulties compared to the United States, which loses its influence when military troops leave. The issue of "national independence" became a major issue.

Even in the 2018 election, the ballot counting was significantly delayed due to the recounting of votes, but this time too, the final result was announced by the election on the 18th, more than a week after the vote. The Saddle faction won 72 out of 328 seats, and as before, it became the majority. Saddle was from the Shiite leader family, and his father-in-law, Muhammad al-Birkill, was executed by Saddam Hussein. Saddle is not a fanatic religious leader and is not all about the Shiite people. According to a journalist who actually came into contact with Saddle, he is a nationalist who wishes for Iraq's independence.

Saddle urged not only the US military but also Iran to stay away. The people of Shiite were also angry with the Iranian powers, and their people's will led to the victory of Saddle. Iranian powers have reduced their seats. The clash between the Saddle faction and the Iranian powers was also immediately reported. Even during the 2018 elections, there was a suspicious fire from the vote storage area. It was speculated that this was the work of a force that disliked the Saddle faction's breakthrough, and the shadow of Iran flickered. As in the last time, Iran's minions are protesting on the streets, complaining of "electoral fraud." Since the Saddle faction cannot take a single majority, it will enter into coalition talks, and it will be necessary to compromise with the Iranian powers. The United States may be easily kicked out, but it cannot easily get out of Iran's influence.

What is more remarkable is the breakthrough of Kurdish political parties, as in the last time. There are several political forces in Kurdistan, but the Kurdistan Democratic Party (KDP), which leads the regional government, has won 33 seats. After all, it does not seem that support has spread outside the Kurdish region, but as the votes of the Shiite people, who make up the majority of the population, are dispersed, it is making a difference to the political power of Iran's affiliated powers.

KDP executives were confident that they would play a major role in Iraqi politics after the election. The Kurdistan Ligue des Patriotes (PUK), two major Kurdistan powers alongside the KDP, reportedly won 16 seats, and rival KDP discussed "Kurdish unity."

The total number of seats in KDP and PUK is 49, and the voice of Kurds can be delivered to the central political world. Kurds held a referendum on independence in 2017, but subsequent sanctions by the Iraqi government, Turkey and Iran withdrew the flag of independence.

Although they seemed to succumb to the central government, they secured a certain number of seats in the 2018 elections and have increased their voice in the political situation in Iraq, where no power can take a single majority. This time, it has further solidified its position in Iraqi politics.

Ethnic writer living in Tokyo. Since he encountered the Kurdish problem while attending college, he has continued to cover and analyze political movements of ethnic minorities, mainly Kurds. He was taught Kurdish  by Kurds and is probably the only Japanese who can use Kurdish. He has completed the translation of a Japanese novel into Kurdish (unpublished). Currently focusing on learning Arabic. He has also learned Persian and Turkish. He is training to become a multilingual journalist.