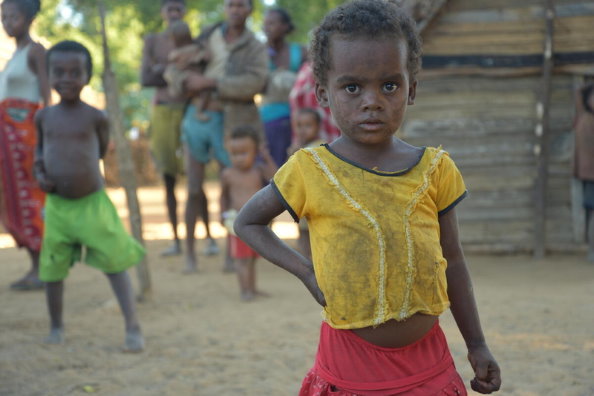 Damage in the agricultural sector is becoming more serious due to the effects of extreme weather and the spread of the new coronavirus infection all over the world. In addition to this, conflicts and border blockages have hindered support for people on the verge of famine. The Food and Agriculture Organization of the United Nations (FAO) and the WFP World Food Program (UN WFP) have recently analyzed the status quo in their report. In particular, food aid is in crisis in African countries. (Photo: WFP/Krystyna Kovalenko, a child living in the Sihanamaro Commune, one of epicentres of food security crisis in the Grand Sud of Madagascar)

In the UN WFP report, Ethiopia and Madagascar are newly added to hunger hotspots that require "highest alerts." Ethiopia is facing a serious food crisis as the conflict in Tigray state continues. By September, 401,000 people are expected to be devastated, the highest number in a country since the 2011 Somalia famine.

Under these circumstances, the United Nations WFP delivered 900 tons of food and emergency supplies (for 50 trucks) to Mekele, the capital of Tigray, in mid-July. But to meet the region's vast humanitarian needs, 100 trucks must be in operation every day. About 4 million people in the state need emergency food assistance (more than 10,000 tonnes of food and 150,000 liters of fuel transported weekly).

Meanwhile, in southern Madagascar, by the end of the year, 28,000 people will be estimated famine-like due to the worst droughts of the last 40 years, rising food prices, sandstorms, and pest outbreaks affecting staple food crops.

As of May this year, in southern Madagascar, hunger is becoming more serious day by day, and many lives are at risk. Approximately 1.14 million people face acute food insecurity, of which approximately 14,000 fall into "catastrophe" (Phase 5: the highest of the five levels of Comprehensive Food Security Classification = IPC =).

This is the first time that phase 5 people have been recorded in Madagascar since the introduction of the IPC method in 2016. Unless urgent action is taken, it is feared that the number of people in the "catastrophe" category will double in the next "lean season" starting in October 2021 (the time when food is scarce before the next harvest).

In the Amboasary Atsimo district, which was the most affected by droughts, sandstorms, flora and fauna pests, and the new coronavirus, three-quarters of the population faced dire conditions and the world's acute malnutrition rate is an amazing 27%.

The worst drought in Madagascar in the last 40 years has occurred for the third consecutive year, with crops annihilated and access to food blocked. In addition to the effects of drought, years of deforestation and associated erosion (now exacerbated by climate change) have devastated the environment, leaving vast arable lands with unprecedented sandstorms.

Food production dropped sharply during the 2019/20 agricultural season. The situation worsened in 2020/2021 as the rainfall was low and below average rainfall continued in the southern part of Madagascar's semi-arid region for the fifth consecutive year. Yields on rice, corn, cassava and legumes in 2021 are expected to be less than half the five-year average. With the arrival of a long and serious "lean season" from this coming October, support without waiting is required.

The United Nations WFP warned on April 22 this year that thousands of people were displaced and in crisis at Cabo Delgado, Mozambique. At that time, the attack on Parma reportedly damaged 50,000 people. Many are said to have boated across the sea and fled from Parma to Pemba at risk. Thousands of people are still unable to evacuate in Parma and Kitunda.

Hunger is still serious, especially children are most severely affected and malnutrition is increasing. A recent study by the United Nations International Children's Emergency Fund (UNICEF) and the United Nations WFP found that approximately 21% of refugee children under the age of five and 18% of children in the host community are underweight. At the same time, the rate of lifelong chronic malnutrition (or “stunting”) was astonishing at 50% for refugee children and 41% for host community children.

In northern Mozambique, conflict-induced hunger continues, with more than 950,000 people currently exposed to severe hunger. The United Nations WFP is expanding its response in northern Mozambique and is implementing plans to help 750,000 internally displaced persons and vulnerable people in the region in Cabo Delgado, Nampula, Niassa and Zambezia.

Next issue, I will cover the situation in South Sudan, the Democratic Republic of the Congo (DRC), Kenya, etc.