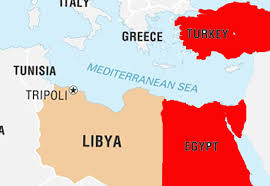 Libya, which has continued a civil war between the Libyan National Army led by General Khalifa in the east and the interim government in the west since 2014, has deepened turmoil due to the 2019 offensive by the Libyan National Army and the intervention of Turkey on the interim government side. In March, a provisional government was established in which both sides participated due to the suspension of war between the two sides and the resumption of peace talks. Under these circumstances, the shadow of Islamic State is once again flickering in Libya, which is about to be elected on December 24, this year. (Photo quoted from Yahoo image)

In the southwestern part of Libya, there have been a series of incidents in which forces believed to be Islamic countries are attacking military facilities. On the 24th of last month, a group of Islamic states posted on the web the state of the members celebrating the sacrifice festival. The photographs were entitled "Caliph Soldiers in Libya during the Holy Eid al-Adha". None of the published photos show any political or military elements, such as handling sheep or eating kebabs, but the shock was widespread when they were sent in the name of Islamic State.

Libyan troops will begin an Islamic State cleanup operation in the South, according to a statement issued on the 24th of last month. The main task is "not easy". According to Libyan military analysts, Islamic State is experiencing active terrorist activity in Algeria and in the border area with Chad.

Libya was also a strange country that built a strong force despite being separated by the sea from Syria and Iraq, where the Islamic State was based. The base of the Islamic State is located in the middle of the east and west, and is famous as a refinery and an oil export port, which made us feel the speculation of foreign powers aiming for oil.

One thing that was clear about the Islamic State of Libya was that there was an established route for combatants from Turkey to Syria and Iraq to Libya. Also, recently, information that a Turkish-made rifle was discovered from a base in Islamic State is circulating with photos. It has been pointed out that it may be the same as the one used by the Libyan army in training. This is not, in fact, evidence that Turkey was supporting Islamic State.

In conflict-affected countries such as Libya, it is quite common to divert supplied weapons to the black market. What is puzzling this time is that the group that seems to be an Islamic country was confirmed in the south. Southern Libya has a tribal area that is not under the control of either east or west. Although it is a power vacuum favored by Islamic countries, there is no important base like Silt mentioned above, and the purpose of rooting there is unknown. I can't even see which country or power is supporting it.

The Libyan interim government has not dispelled doubts about its ability to fight the war on terrorism. It is none other than the provisional government that has allowed Islamic State to be ridiculous. Libyan political scientists say that only General Haftar can eradicate terrorists in collusion with foreign powers. Islamic countries are also regarded as the minions of foreign powers.

Haftar reiterated on the 30th that Libyan peace would not be possible without the expulsion of foreign troops and their mercenaries. Will the operation to wipe out the Islamic State in the south result in damaging the reputation of the provisional government and raising Haftar's voice? It should be noted that the results of the elections scheduled for Christmas will influence the survival of the current interim government in which the West and the East participate.

Ethnic writer living in Tokyo. Since he encountered the Kurdish problem while attending college, he has continued to cover and analyze political movements of ethnic minorities, mainly Kurds. He was taught Kurdish (Kurdish) by Kurds and is probably the only Japanese who can use Kurdish. He has completed the translation of a Japanese novel into Kurdish (unpublished). Currently focusing on learning Arabic. He has also learned Persian and Turkish. He is training to become a multilingual journalist.