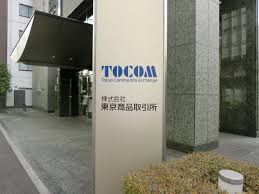 The Tokyo Commodity Exchange (TOCOM) has begun to move towards a new listing of liquefied natural gas (LNG) futures trading. It is expected that an application for approval will be submitted to the Ministry of Economy, Trade and Industry (METI) of the regulatory agency in early September this year, with the aim of starting transactions in April 2022. (Photo quoted from Yahoo image)

In the Asian region, the short-term and spot markets for LNG are expected to expand in the future. In response to growing needs for hedging LNG spot prices and fixing power generation margins, LNG futures scheduled to be listed by TOCOM will be denominated in yen for Platts JKM2, which is the index price of LNG spot cargo for Northeast Asia, according to the exchange.

TOCOM planned a new listing of LNG as far back as nearly 10 years ago. In July 2014, Emeritus Chairman Lio Melamed of CME Group (Chicago), one of the world's largest derivatives exchanges, visited Japan. Melamed announced that the CME Group supported efforts to create a futures market in Japan against Prime Minister Shinzo Abe (at that time).  Momentum for listing on LNG has increased.

This time, TOCOM has finally completed the listing application, but there are many experts who question the ideal futures trading system in Japan as to why it takes so long. There are open interest restrictions in the Japanese commodity futures market, and while the US markets, where the active contract month is the current delivery month, the Japanese market is centered on futures contracts.

In addition, it has been pointed out that foreign investors will need to hedge currency exchange rates because they are traded in yen, and that communication via English will not be successful.

There is a regulatory agency stance on new commodity listings. In the US futures market, it is said that "it is only necessary to list five products and one product is booming", and the mainstream stance is to focus on speed by starting trading and then assessing the subsequent situation.

On the contrary, in the case of Japan, if a new listing does not result in a booming transaction and the listing is immediately delisted, the Ministry of Economy, Trade and Industry and the Ministry of Agriculture, Forestry and Fisheries (MAFF), which have jurisdiction over commodity futures transactions, will be held reluctant to take responsibility for supervision.

It is also true that the attitude has been pointed out. It cannot be said that the Japanese way of thinking of "birth small and grow big" is wrong, but it cannot be overlooked that the basic idea of futures trading is fundamentally different from that of Europe and the United States etc.

Japan is the largest LNG importer in the world.As the transition to a carbon-free society progresses on a global scale, LNG is drawing attention as an alternative to coal-fired power generation.

With the addition of LNG futures to the currently listed electricity, crude oil and petroleum product futures, TOCOM will further promote the development of an environment for a "comprehensive energy market" where electricity and power generation fuels can be traded in a one-stop manner.