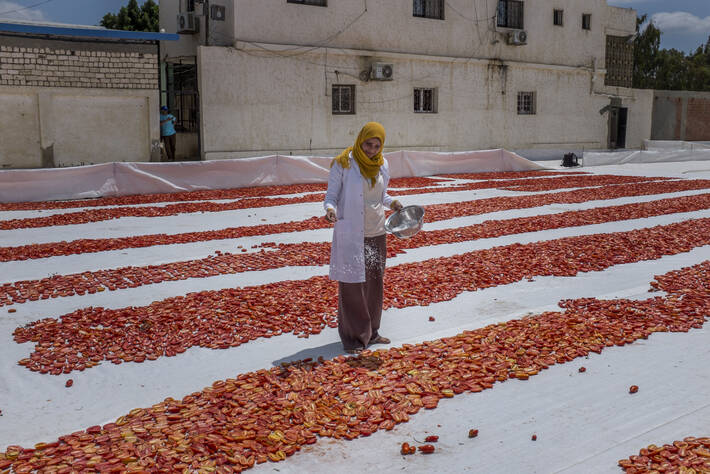 In a sign that food security and nutrition are increasingly seen as key vectors for sustainable development, the United Nations Commission and Development (CPD) approved a resolution likely to enrich and intensify discussions at the upcoming UN Food Systems Summit. The Food and Agriculture Organization of the UN (FAO) released it on May 14. Photo=Spreading salt on sun-dried tomatoes in Egypt.

The agreement, as well as the UN Secretary General’s report to the Commission to which FAO made substantial contributions, span a vast array of themes - from the need to make healthy diets affordable to all and the importance of assuring income opportunities for all even as capital-intensive industry transformations may reduce the need for existing types of jobs and labor, to stopping illicit cross-border financial flows and the need for governance and ownership of big-data to make sure its benefits are available to all, including smallholders and marginalized people. The breadth of topics illustrates just how complex a task the shift to sustainable agri-food systems will be.

"Agri-food systems lie at the heart of sustainable development," QU Dongyu, Director-General of the Food and Agriculture Organization of the UN (FAO) told commission delegates through a video-message. Even before the world population has reached an expected 10 billion in 2050, "food systems are already exceeding planetary boundaries for key resources," he said, pointing to other problems including unbalanced dietary patterns that are leading to both chronic and infectious diseases and the scale of inequalities that make access to affordable healthy diets a challenge.

Qu called on the international community "to focus on actions that favor responsible consumption and production patterns to ease pressure on ecosystems, reduce greenhouse gas emissions and mitigate climate change" as well as to "apply policies that create income-earning opportunities, build human capacity and provide revenue supplements where needed."

FAO's technical experts provided a large share of the inputs to the resolution and the UN Secretary-General's Report on Population, food security, nutrition and sustainable development. The approval of the resolution - whose central emphasis is that the promotion of sustainable food systems and agricultural production including agroecological practices and other innovative approaches, are key elements for the eradication of poverty in all its forms and dimensions -marks the Commission's first agreement in five years, indicating growing convergence among Members.

Some takeaway facts from the SG's Report

The number of people aged 65 years or older is projected to more than double from 2020 to reach 1.5 billion in 2050, affecting demand for various types of food and minimum dietary energy requirements.

Worldwide, only 19 percent of children aged 6-23 months eat a minimally accepted diet, and only half eat the recommended minimum number of meals.

Since 2012, the global prevalence of undernutrition has followed a path close to one that FAO, in its report ‘The future of food and agriculture-alternative pathways to 2050' identified not as "business as usual" - which is already unsustainable - but as the "worst-case" trajectory, associated with the ‘stratified societies' characterized by increasing inequalities and overuse of natural resources.

Robotics, digitalization and artificial intelligence are all being deployed in agri-food systems and may reduce the need for workers. In addition, in many low and middle-income countries, the average farm size has been decreasing. All this calls into question the applicability of the conventional wisdom regarding broader economic transformation and development patterns.

The world is not on track to eliminate hunger by 2030, and the current global food system is environmentally unsustainable.

A sustainable transformation of food and agricultural systems is required at all levels and in all countries.

Making healthy diets affordable and accessible for all

FAO's Director-General emphasized the need to address - and minimize - trade offs so that agricultural output can be increased while reducing greenhouse gas emissions, natural resource stress and employment losses.

The Secretary-General's report recognizes that policies to make the food system more sustainable may result in higher food prices if all production and consumption costs including resource degradation and greenhouse gas emissions are taken into account. Price increases reflecting such externalities may lead to more careful use of available resources - and less food waste - but may pose a challenge for economic access to food among poorer populations.

"Food systems cannot be sustainable per se," said Senior Economist Lorenzo Giovanni Bellù, who is the UN Strategic Foresight Network's focal point for FAO, during the technical Panel for the presentation of the SG report to the CPD. He pointed out that economic access to sufficient, safe and nutritious food for all, which is a critical dimension of agri-food systems' sustainability, has to be ensured by all the economic sectors, not only agriculture. Members agreed that governments should take targeted economy-wide actions to improve income earning opportunities for the poor.

To reinforce this message, FAO's Chief Economist Máximo Torero, in the High-Level Panel addressing the CPD, clearly stated that hunger and poverty cannot be defeated if inequalities at all levels are not drastically reduced.

The Report also noted that tackling all forms of malnutrition will require multi-faceted actions - engaging sectors ranging from health, education and agriculture to social protection, planning and economic policy - to play active roles along with political leaders to foster the required range of actions at the individual, household, community, national and global levels.

"FAO supports countries to develop, revise and implement dietary guidelines as recommended by the Secretary-General Report," said FAO Nutrition Officer Ramani Wijesinha Bettoni, part of the team that advised preparation of the report. "We aim to ensure dietary guidelines are developed using a food systems lens, giving countries the options to consider some or all dimensions of sustainability - sociocultural, environmental, economic and health."

The Commission also urged states and the international community to support investment in seed systems for fruits and vegetables, not just the staple crops - such as the commodities measured by the FAO Food Price Index - and to make greater use of plant diversity, increasing the production of underutilized plant-based foods.

The Chair of the CPD, H.E. Ambassador Yemdaogo Eric Tiare (Burkina Faso) congratulated FAO for its technical support to the 54th CPD, highlighting that they contributed to the successful outcome of the Commission.