China's Goals and Role in the Red Sea 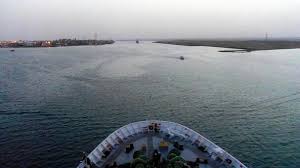 The area of ​​the Red Sea is about 440 thousand square kilometers. This sea connects the Mediterranean Sea to the Indian Ocean and the Persian Gulf. It is one of the main crossings of shipping and international trade. ‏The Sea is considered as the boundary between two continents; Asia and Africa. (Photo quoted from Yahoo’s image)

The strategic, economic and geographical importance of the Red Sea has made it a battleground for regional and supra-regional powers, with each actor trying to expand its sphere of influence in the region.

Therefore, China is also looking for a greater role in this region. The neighbors of this sea are the countries; Saudi Arabia, Yemen, Djibouti, Ethiopia, Sudan, Egypt, Israel and Jordan. The Red Sea has played a prominent role in the world trade, especially oil and gas. Also, this sea is strategically an important passage for any military movement of countries towards the Persian Gulf region.

In fact, the passage of merchant and military ships, producing about 30 percent of world oil in the region, raw materials needed by industry, factory exports, etc., have turned the Red Sea to a pole that has also affected the interests and goals of Beijing. In this regard, the gradual withdrawal of the United States from the Middle East, including the Red Sea and the Horn of Africa, has made China see the vacuum of American presence as an opportunity for a greater geopolitical presence.

China, which has already expanded its military relations by supporting anti-piracy missions, peacekeeping missions, training of military personnel, and so on, in 2017, opened its first overseas military base in Djibouti.

The base located near Bab el-Mandeb at the entrance to the Red Sea could be a prelude to support aircraft carriers and becoming a more global navy in other parts of the world.

In fact, China has now reached a stage where it feels it has to play a military role in different parts of the world, and one of the tools to maintain its economic position and increase its power in competition with the United States and to meet its needs is using military leverage. Therefore, the Chinese military presence can also bring regional transactions to a new level. Also in recent years, China's economic relations with Africa and the countries around the Red Sea have increased significantly. A significant portion of China's exports go through the Red Sea.

Therefore, China's active presence in the Red Sea ports serves the country’s strategic interests. Through massive investments and ‘One Belt-One Road’ economic and geopolitical plan, China seeks to link areas such as energy, the strategic location of ports and the Red Sea and the Horn of Africa, to its interests.

In another dimension, the influence and development of the role of other regional and global actors alongside China can be purposefully and systematically defined in the Red Sea, both in terms of their geopolitical needs and in the form of competitive and battle-based approaches to gaining international prestige and a regional base. Therefore, China is trying to have an increasing presence in the Red Sea in line with its geopolitical goals.