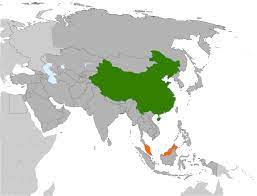 Diplomatic relations between China and Malaysia were established in 1974. During the Cold War, the foreign policy of communist China was based on supporting revolutionary leftist organizations around the world. Therefore, Malay Communist Party and its military wing, the Malay National Liberation Army, the Communist Party of Borneo, and the Communist Party of Northern Kalimantan, were all supported by China. Many in the Malaysian government considered the Chinese ethnic population in Malaysia to be the ‘fifth pillar’. But following the reforms in China, the country's support for communism gradually diminished, and in the new era of Sino-Malaysian relations, the travel of officials entered a new phase.

Malaysia's determination to use China's policy for economic modernization strengthened economic ties between the two countries, but national security was also a concern. So Malaysia has been cautious in dealing with China. In fact, bilateral economic needs have led to closer economic ties between the two countries over the past few decades, and Political sensitivities were of secondary importance.

In fact, economic factors clearly guide Malaysia in developing relations with China, and this type of relationship has been strengthened in recent years.  In another dimension, Malaysia is politically influenced by the interests of the three major ethnic-religious circles of the country including Malaya, Chinese descent, and Indian. Malaysians of Chinese descent make up about 24% of the total population. Therefore, Malaysian government is considering gaining more support from the country's Chinese descents in order to develop its relations with China.

In fact, Malaysia has been China's largest trading partner (ASEAN) for many years and one of China's largest trading partners in Asia. Even now, cooperation in the China’s Belt and Road Initiative, the creation of industrial parks, and foreign infrastructure projects have led China to deepen its investments in Malaysia and to have no competitor in the field of deep investment in Malaysia.

Sino-Malaysian relations have remained stable over a long period of time, and their trade volume has increased despite ideological differences. In fact, although the Malaysian parties each have a special view on the type of relationship with China, the priority of the economy has largely been able to help expand relations. In the meantime, although the two countries have had differences over the South China Sea, various agreements such as military purchases from China, bilateral consultations between officials, and strategic consultative meetings indicate that opportunities for cooperation in the relationship are being addressed.

In fact, in Malaysian foreign policy, while maintaining a positive view of the Western world, more or less a kind of national independence is considered, and accordingly seems to reduce the scope of relations with the United States and gain more benefits in dealing with China (despite economy (COVID). Meanwhile, the Malaysian government is paying more attention to China's position in the region and seems to be pursuing a peaceful approach to tensions in the region, such as the South China Sea, and avoiding any distrust of Beijing.

Critics, however, are concerned about China's political and ideological goals in the region and Malaysia. Many Malaysians see heavy contracts as a precondition for Malaysia to become increasingly dependent on Chinese investment, which could have risks such as ‘debt trap’, ‘new colonial version’ and other negative effects on the country's future.