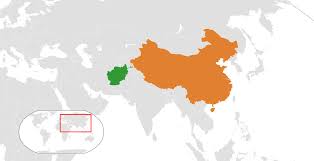 China recognized Rabbani's anti-Taliban government in Afghanistan in the 1990s. After the establishment of a new regime in Afghanistan, Beijing pursued minimal relations with Kabul. Therefore, in the framework of international cooperation for Afghanistan, it assumed obligations and responsibilities in some important projects and infrastructure of Afghanistan. (Map quoted from Yahoo’s image)

In fact, Afghanistan has trillions of dollars worth of mines, but Mining in Afghanistan requires security. In the past, China's major projects in Afghanistan have failed. The Aynak copper project, which was one of the five major global agreements between China and Afghanistan, came to a standstill due to insecurity and other uncertain, intelligence and calculated reasons.

In the eyes of many, such as what Mr. Ghani pointed out in his article published in Afghanistan's Foreign Affairs magazine, the decision to withdraw all Western forces from Afghanistan is entering an “uncertain stage”.

From this point of view, however, leaving Afghanistan provides a platform for the preservation of national sovereignty, the Islamic Republic, democracy, unity and neutrality in Afghanistan and the self-reliance of Afghans and the attainment of true sovereignty for the Afghan people. Therefore, the national spirit of the Afghan people is an important obstacle to the greater presence of the Chinese military in Afghanistan.

Even if China wants to be present in the form of security expansion in Afghanistan, it will face resistance. It is also likely that China send troops under the name of peacekeeping forces to Afghanistan, but rivalry between India and China will escalate in the country and it will face its regional rival, India, in Afghanistan. India has also shown that it does not want to lose its role in Afghanistan easily in the face of Pakistan. Moreover, any large-scale increase in China's security and military presence in Afghanistan is not in line with the strategic interests of Iran and Russia in Afghanistan.

In addition to a major hurdle for Uighur extremists, drug trafficking from Afghanistan to China has been a major concern for China. More than 25 percent of China's opium comes from Afghanistan.

In the eyes of many, drug trafficking could be a lucrative source of funding for Uighur separatists and dissidents in China. However, despite the NATO vacuum in Afghanistan, the difficulties of the reconciliation process with the Taliban to achieve some degree of stability and potential are seen as a problem in increasing China's role in Afghanistan.In addition, if the Taliban-Afghan-Afghan tension gets out of control, its negative effects on China will be increase. The  experience of the Soviet presence and then the United States and the lack of ability to create complete security in Afghanistan will make China much more negligent and  cautious.

Therefore, the only dominant aspect of China that provides an opportunity for the country to have a greater presence in Afghanistan is a very large economic presence in sectors such as mining.