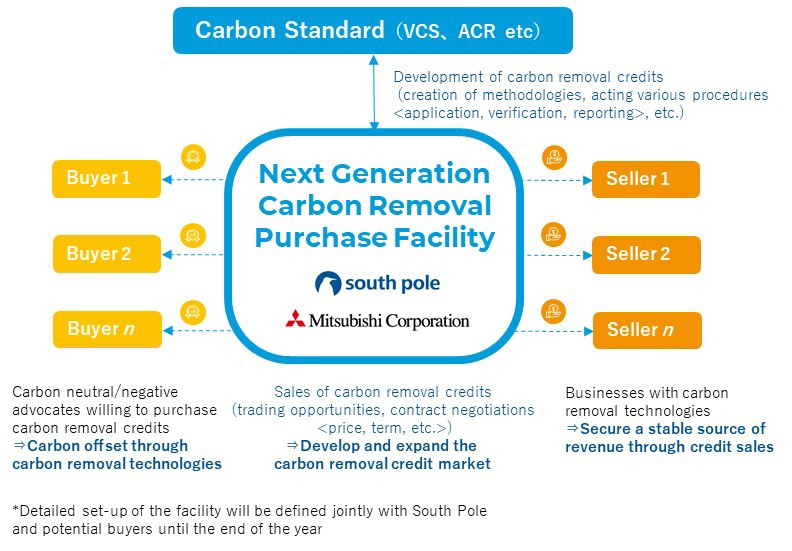 Mitsubishi Corporation (MC) announced it has signed a collaboration agreement with one of the world's largest carbon credit developers, South Pole. Part of MC’s efforts to reduce its environmental impact, the agreement covers the joint study of a project to generate and sell carbon credits derived from carbon removal technologies such as CCUS (Carbon Capture Utilization and Storage). (Chart quoted from Mitsubishi Corp’s news release)

In order to achieve the goals set forth in the Paris Agreement and keep global warming within 1.5℃, it is considered critical not only to reduce CO2 emissions, but also to introduce carbon removal technologies such as CCUS, which captures, stores, and effectively uses the CO2 already emitted into the atmosphere. However, technological innovation and cost reduction are issues that need to be addressed before carbon removal technologies can be implemented on a large scale.

This project aims to solve these problems by developing and selling carbon credits for carbon removal technologies, providing a new source of revenue through credit sales to the companies that supply the credits, and offering credit buyers the opportunity to purchase the credits.

MC has been working on several projects in the field of CO2 mineralization, and by utilizing its knowledge and network, will examine and determine the feasibility of commercialization with South Pole by the end of this year. Through the commercialization of this project, MC hopes to contribute to global decarbonization by creating and leading a virtuous cycle that promotes the development and implementation of superior carbon removal technologies such as CCUS.

South Pole recognizes that private sector climate action is essential to address climate change. To leverage this potential, South Pole focuses on working with large companies to reduce their environmental footprint while making concrete impacts on removing CO2 from the atmosphere through direct development of climate action projects.

Founded in 2006, South Pole today has about 500 staff in 18 offices globally, and has developed about 1,000 projects responsible for removing, reducing or avoiding over 100 million tons of CO2e to date. South Pole has worked with over 1,000 companies and organizations on their climate journeys.