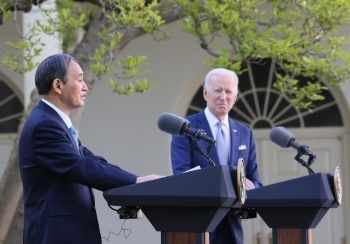 Since the accident at Fukushima No.1 Nuclear Power Station in March 2011, politicians have closed their mouths on nuclear policy.For politicians, the statement to promote nuclear power means criticism from voters and means losing their status as politicians. However, changes have occurred recently. Needless to say, restarting the nuclear power plant, politicians from the ruling Liberal Democratic Party (LDP) have made remarkable statements about the need for new expansion.  (Photo is provided by Japan’s Cabinet Public Relations Office.The two leaders of Japan and the United States,  who agree on the launch of the "Japan-US Climate Partnership" at the meeting held on April 16)

The change is that Prime Minister Yoshihide Suga of Japan, who participated online at the US-sponsored summit on climate change on April 22, Japan will reduce greenhouse gas (GHG) by 46% in fiscal year 2030 compared to 2013. By declaring that, it surfaced at once.

The day after the Prime Minister's announcement of a "46% reduction," the Liberal Democratic Party's Parliamentary League for the Promotion of Stable Power Supply will include future new expansion and replacement of nuclear power plants in the government’s basic energy plan revised this summer regarding the nuclear power policy submit a proposal to the government.

Former Secretary-General at LDP, Hiroyuki Hosoda, chairman of the Parliamentary League, said that there is a problem with the stable supply of electricity in renewable energy that is affected by the weather condition, and emphasized that nuclear power plants must be utilized to achieve the 46% target.

The movement of local governments is also conspicuous. Governor Tatsuji Sugimoto of Fukui Prefecture announced on April 28 that three nuclear power plants, which have been in operation for more than 40 years, will be restarted in the prefecture.

After the accident at Fukushima No.1 Nuclear Power Plant, 24 of the 60 nuclear power plants in Japan were decommissioned. Currently, 33 units (3 units are under construction) still exist, but only 9 units are restarting.

Looking overseas, we cannot overlook the movements of China and the United States etc. China is steadily promoting its nuclear power policy. China Huaneng Group, one of the five major electric power companies in the country, announced at the end of March this year that Phase II construction of the Changjiang nuclear power plant in Hainan Province has begun. In the future, it plans to invest about 4 billion yuan (about 67 billion yen) to complete Unit 3 in 2025 and Unit 4 by the end of 2014.

In Europe, the e-Lise Foundation, a non-governmental organization in the Netherlands that supports the nuclear industry, has prepared and published a report to the Dutch government for the construction of a new nuclear power plant. The Borssele power plant, the only nuclear power plant in the Netherlands, is currently in operation. In 2013, it has been 40 years since the operation started, but it is said that an extension of 20 years is allowed.

Meanwhile, in the United States, on April 27, the Department of State (DOS) announced that it would start a basic infrastructure (FIRST) for the responsible utilization of small module reactor (SMR) technology, which is an international support program, as an initiative of the Biden administration. DOS has announced plans to invest $ 5.3 million in this plan.

By the way, the international community is accelerating the movement to freeze loans for coal-fired power generation under the Paris Agreement. In order to promote decarbonization, financial institutions, mainly in Europe and the United States, are urging the transition to renewable energy development. Some even say that the background of international efforts is that "international financial capital that has given up on fossil fuels such as oil and coal is in the dark."

International financial capital is a so-called “conspiracy theory”, in which it pretends to accelerate renewable energy development first, and then plans to obtain enormous interests in nuclear power business.

It is assumed that international financial capital controls the entire world in G-Zero, where superpowers no longer exist. Although the truth is unknown, the background to this view can be linked to a series of movements surrounding the development of nuclear power plants in the world. (I have not confirmed any evidence to support the conspiracy theory)

Since the accident at the Fukushima No.1 nuclear power plant, Japan, which has been in a state of cessation of thinking related to the nuclear power policy, has been unable to draw conclusions by following parallel lines forever, with pros and cons repeating their respective claims.

The issue of global warming, which the international community must work together as one, should be a great opportunity to find out the ideal and direction of Japan's nuclear power policy, not just decarbonization.

A commodity journalist based in Tokyo.

In addition to approaching trends in international politics and the world

economy from the perspective of resources such as energy, minerals, and food. He has contributed to "Weekly Economist" and others.