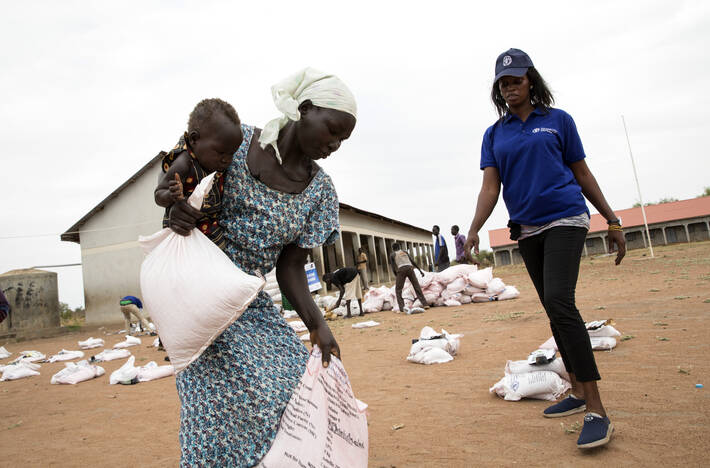 Urgent and scaled-up efforts to help those who produce South Sudan's food can make a notable contribution to mitigate suffering in a country, where three out of every five people cannot meet their daily food needs, the Director-General of the Food and Agriculture Organization of the United Nations (FAO), QU Dongyu, said recently. (Photo=FAO distribution of crop seeds in South Sudan)

"FAO is determined to stay and deliver, helping farmers get back on their feet," he stated in opening remarks at a virtual ‘Briefing on the humanitarian situation in South Sudan" organized by the UN Office for the Coordination of Humanitarian Affairs (OCHA).

The event was held for Permanent and Observer Missions to the U.N. and other international organizations in New York and Geneva.

FAO's Director-General noted that the country's people have seen their livelihoods eroded by multiple shocks, including conflict and violence that have impeded the ability of aid efforts to operate. "Where conflict and insecurity persist, acute food insecurity is rising," he added.

The UN Under-Secretary-General for Humanitarian Affairs and Emergency Relief Coordination Mark Lowcock stated that hunger levels are currently at their highest level in South Sudan's 10-year history as a nation. Other speakers noted that nine aid workers were killed in 2020 and that the risks of famine were greatest in areas where conflict levels were highest, and access was most limited.

The latest Integrated Food Security Phase Classification - IPC - analysis projects that 7.2 million people will experience a crisis or worse levels of acute food insecurity during the ongoing lean season. One-third of these will be in IPC Phase 4, "Emergency", FAO's Director-General noted. Some are already in IPC Phase 5 - "Catastrophe" - according to the Global Report on Food Crises released on Wednesday by FAO, the World Food Programme (WFP), the European Union, and other partners.

The briefing was held to spur contributions to relief efforts for the country, as received funds are far behind pledged schedules. FAO has received less than one-fourth of what it requires to carry out its share of the emergency response in South Sudan, the Director-General noted.

In 2020, FAO provided 5.2 million people with livelihood assistance thanks to the support of its donors and partners on the ground, ensuring families had access to food for several months thanks to their own production.

That reflects the powerful multiplier effect that supporting agriculture can have, the Director-General said in closing remarks at the briefing, noting that FAO distributed assets that led to the production of 370 000 tonnes of cereals and pulses last year.

To generate maximum efficiency and benefit, such efforts need to be done in sync with the agricultural and ecological calendar. That is critical as South Sudan will soon have its rainy season - which will benefit farmers and food production.

The Director-General  noted that a top priority for FAO in South Sudan has been large-scale procurement and pre-positioning of crop seeds. However, inadequate funding means that only 5 000 tonnes - were positioned in the first three months of 2021, which is half of the planned amount.

Addressing South Sudan's crisis is not just about securing sufficient funding but also about forging a culture of peace, which will both foster and benefit from efficient, inclusive, resilient, and sustainable agri-food systems, with positive impacts on agricultural livelihoods, food security and on the national peacebuilding process, he added.

The virtual briefing was held a day after foreign and development ministers of the Group of Seven nations committed to providing an additional $1.5 billion of humanitarian and resilience-building support to three countries at risk of famine, including $341 million for South Sudan. "The earlier we act the further money goes and more lives are saved," said Lowcock.