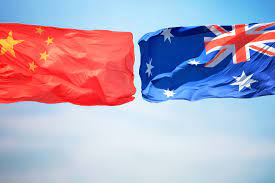 As the trade conflict between China and Australia intensifies, the Chinese government has recently taken steps to suspend all activities of the China-Australia Strategic Economic Dialogue indefinitely. How long will the retaliatory battle last? There is a view that the trend of iron ore and liquefied natural gas (LNG) trade will be the key to predicting it. (Photo quoted from Yahoo’s image)

The National Development and Reform Commission of China announced on May 6 that it will suspend the activities of the China-Australia Strategic Economic Dialogue entirely and indefinitely. In response, the Australian side issued a statement that Trade Minister Taehan was "disappointed with China's decision" without a break.

The last strategic economic dialogue between China and Australia was held in 2017. The following year, the relationship between the two countries continued to deteriorate as Australia decided to eliminate China's major telecommunications equipment company "Huawei" for the high-speed communication standard "5G."

In particular, it was about a year ago that the retaliation battle became more intense. It all started when Australian Prime Minister Morrison called for an international investigation in China (Wuhan) over the source of the new coronavirus. Not surprisingly, China protested fiercely.

The Australian government took concrete steps in late April this year. Announced that the Victoria State Government will revoke the agreement signed with China in connection with China's "One Belt, One Road" economic policy. This measure is based on the enactment of a law (foreign relations law) that allows state and local governments to revoke agreements signed with foreign countries at the end of last year.

It is also reported that the Australian government will soon take measures such as restricting the use of a 99-year lease agreement over Darwin Harbor, which a Chinese company has signed with the Northern Territory of Australia.

The reaction on the Chinese side was quick. In May 2020, China took steps to add a tariff of about 80% on anti-dumping (unfair barley) on Australian barley. Starting with this, China has issued a series of restrictions on imports of Australian coal, wine and timber. On December 16, the same year, Australia filed a lawsuit against the World Trade Organization (WTO) as a countermeasure.

Since June 2020, China has not allowed transport vessels carrying Australian coal to enter the port, causing many carriers to stay off the coast of China. According to Australian media, dozens of ships are still forced to berth offshore. Meanwhile, in August of the same year, Australia escalated sanctions by both sides, including blocking Chinese dairy companies from acquiring Australian peers.

While both sides do not distort their own claims, it is the iron ore from Australia and LNG that are attracting attention in predicting the future of the conflict.

An official of a major trading company said, "Oil embargo was the diplomatic card for sanctions against Iran by the former Trump administration in the United States. Iron ore in Australia is in the same position, and it will be a vital issue for China, too. He added, "If China embargoes iron ore as a means of sanctions, it will change from a trade dispute to a security issue."

Iron ore has a decisive meaning for both China and Australia. It is probable that China has not taken up the subject of import restrictions so far because iron ore and LNG cannot be replaced by other than Australia.

The Australian dollar was sold in the foreign exchange market following the announcement of an indefinite suspension of strategic economic dialogue. On the other hand, on the London Metal Exchange (LME), non-ferrous prices such as copper and aluminum rose across the board. If iron ore and LNG emerge as sanctions in the future, it is inevitable that the prices of these commodities will also be affected.

Iron ore and LNG are the destinations of sanctions for dispensing, such as coal, barley, and wine, which will be used as strategic supplies for diplomatic cards. It seems that the psychological warfare and endurance warfare between China and Australia will continue for a while, which one will drop the fist that has been swung up first.

A commodity journalist based in Tokyo.

In addition to approaching trends in international politics and the world

economy from the perspective of resources such as energy, minerals, and food. He has contributed to "Weekly Economist" and others.