Kindness and Strength Ask Mr. MAGO with his thoughts on E-waste Culture, economy and environment all move 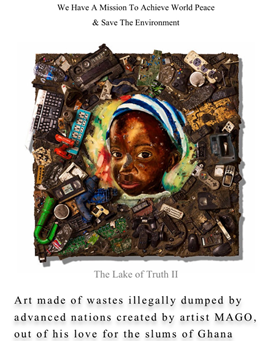 An exhibition by artist Mago Nagasaka (MAGO) was held at the exhibition hall of the Isetan Shinjuku Main Building until Saturday, April 24th.

I had the opportunity to come into contact with Mr. MAGO's art.

Although it was difficult to get out or was required to stay, but I felt that it was necessary.

However, I think that there are many people who actually chose to stay home.

Under such circumstances, I would like to tell you what I felt in a real thing, even online, hoping that there is something that will reach everyone's hearts. 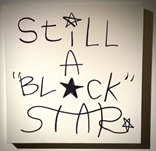 The theme of this MAGO exhibition is―Return to destiny, Still A “BLACK” STAR―

A slum in Ghana, a mountain of e-waste.

Poverty, environmental problems, and conflicts around the world.

The works of MAGO's soul, born from "shock," "fear," and "conflict," were on display. 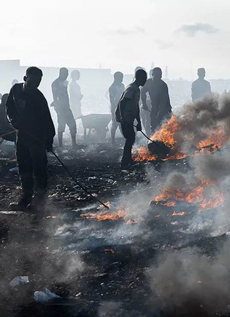 There, MAGO met those who were desperately burning electronics, dumped by advanced nations for a mere $5 a day. And he decided to convey the tragedy of Agbogbrosie to developed countries through art.

"I want to change this reality with art"

" I want to make the world's leading electronic equipment graveyard the best eco-town in the world.

When I visited the exhibition, a big black star gate welcomed me. 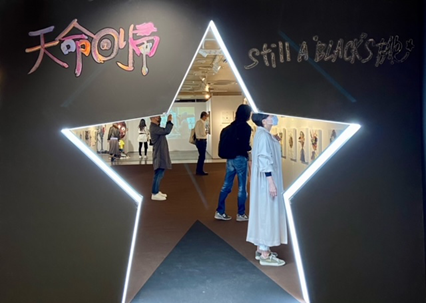 The black star in Ghana that he wants to shine

After passing there, various his works were waiting.

Unlike what I originally imagined, there were various works, from small works to large works that covered the entire wall.

Large works use a lot of e-waste. They were powerful and gave the viewer a strong feeling for Ghana's current situation and his strong feelings for the future.

In particular, this work "The Law of Conservation of Mass" is one of the works that I was interested in.

"Everything on earth is complete."

E-waste burning in slam is all happening now on our earth and in the world.

Please keep in mind that they happened on the same star.

I felt that feeling.

And the small works had many pictures of children and animals, and I felt his kindness from them. 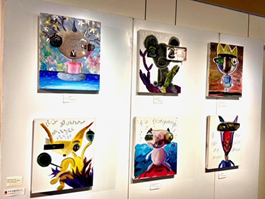 In the current situation in Ghana, there are almost no animals due to serious air pollution.

Under such circumstances, the animals and people living there are eating things that contain pollutants.

Maybe they are works that were drawn while imagining that many animals lived and the children were laughing with peace of mind in the future.

And I was fascinated by the works of "Moon" that were born after the terrorist attacks in Paris in 2015. 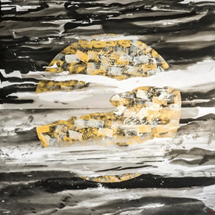 The feelings put into the moon. ..

Envelop sadness with beauty and kindness.

I felt that I wanted to cherish this way of thinking even it is a difficult time.

Sustainable capitalism that MAGO says is new in terms of words.

However, I thought that it would be a very important concept in the future society.

Based on this idea, MAGO constructed the first free school "MAGO ART AND STUDY" in the slum in 2018. In 2019, he opened the e-waste museum "MAGO E-Waste Museum", which will be the first cultural facility in Agbogbloshie. Here, not only art is exhibited, but it is also returned to tourism income to Agbogbloshie. And he is also raising artists.

MAGO said “By 2030, I want to raise over 10 billion yen and give the people in the slum a state-of-the-art recycling plant as a present.”

The construction of the recycling plant he is aiming for this time will be done directly by the MAGO company.

"All funds are covered by art."

Considering the problem solving for E-waste and E-scrap, the current situation is quite difficult.

However, I felt that MAGO's works have the power to appeal to people's hearts and move them.

And now the documentary film "Still A Black Star" is also being produced in Hollywood.

These are the pioneers, and I think it would be good if we could derive to the parts that have not been exposed to the light yet.

MAGO has a strong desire to appeal to crowd psychology in the world of capitalism.

"It is more important for the local people to be independent and live with peace of mind, rather than relying on donations. And I want to eliminate poverty one by one."

It's easy to say in words, but actually acting is very important and has a lot of weight. When I heard the story, I strongly felt Mr. MAGO's feelings.

At the exhibition, T-shirts and other items based on MAGO's works were also on sale.

The proceeds of the work will be returned to people in Ghana after deducting expenses, etc., and will lead to funds for the recycling factory in Ghana.

I thought it would be good to visit the online shop at home time during Golden Week.

I hope that the feelings I received will reach everyone as much as possible.

I have high expectations for Mr. MAGO in the future, and I hope that we can live together to make the earth a better planet for the next generation.