Balochistan the Vulnerability of The Belt and Road

Recently, many terror incidents in Balochistan of Pakistan have been reported.According to Balochistan Inspector General of Police over 900 polices killed in Balochistan since 2009. Some of them targeted Chinese sites. Such acts threaten China leading The Belt and Road Initiative(BRI). Pakistan is a special ally for China and vice versa. China has been great back for Pakistan against India.

Chinese people say that Pakistan is an oldest friend of ours. BRI has progressed under the name of China and Pakistan Economic Corridor(CPEC) in Pakistan. The longest and largest corridor of CPEC is Balochistan. But Balochistan is center of ethnic questions in Pakistan. Prominent militia is Balochistan Liberation Army(BLA). BLA was unknown a few years ago. BLA has become famous by targeting China related sites. Some reports focused on just such militias. However what Baloch people think really is not unclear. It is critical to the future of CPEC. I visited Balochistan for covering voices of people.

Balochs Seek Jobs Rather Than Their State

Do Baloch people want independent state? Baloch nationalists in exile impress us so in propaganda campaigns. They call their homeland Occupied Balochistan. In the era of British India, there was a kingdom named Qalat in today's Balochistan province. When British India was decided to be separated into India and Pakistan, Qalat Kingdom could choose whether to join Pakistan or to be independent. Pakistan leader Jinna forced her to merge into Pakistan. Due to the history, some Baloch nationalists still dream national independent state.

Voices of local people are still veiled. Local authority prevents foreign travellers contacting local people. Security officers said that their measures were for keeping foreigners safe. They feared local people might tell them inconvenient truths in real. Foreigners need to be issued Non Objection Certificate(NOC) by the police. It warned not to contact local people. 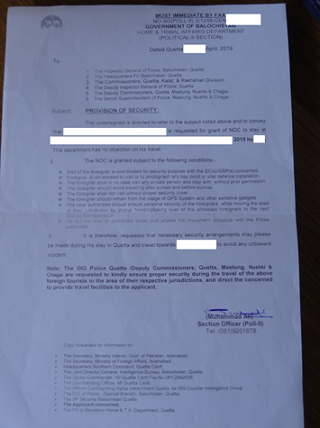 I heard compliments about unemployment mostly. China has created jobs  in Balochistan though it is not enough as expected. It is difficult for local people to access few opportunities. Good jobs are occupied by Panjabi people.  An irrigation engineer of  Baloch who worked at a barrack of the Pakistani Army once said if dum or irrigation construction project launches, only Punjab people get the jobs. Tough jobs like miner are only available for local people. He said also it was reasonable that some Baloches took arms against the government of Pakistan and China . Baloch people love peace but they are not afraid of struggle when their lives are threatened , he added.

Actually Pakistan is Punjabi dominant country. Baloch consists of 6% of total population. Some said Punjabi has become rich by sacrifice of Baloch.

Baloch people have criticized China for exploiting natural resources before BRI started. Balochistan is richest mineral province in Pakistan. Reqo-dic and Saindiq mountains are famous as rich gold and copper mines. Both have been developed by China. A mine worker said Chinese field overseers and engineers had never gone to working places by road. They use flights even to move to near places for the fear of attacks. Not all mines aren under Chinese influence. There is a chromite mine near Quetta. Local political parties prevent it from seizure of China according to a local politician. Popular supports to ethnic political parties were easily seen around Balochistan. Many shops raised Balochistan Nationalist Party(BNP) flags above their buildings. 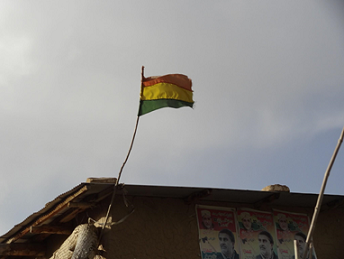 The flags of Pakhtunkhwa Milli Awami Party were also seen around Balochistan. The party is for  Pashtun people. Pashtun is second largest ethnic group in Balochistan and Pakistan too. They have suffered from violence of Pakistani Army as Baloch.

Balochs are not so discriminated due to their ethnicities. But their ethnic interests are ignored.

Most Pakistanis say Baloch nationalists are proxy of India and other enemies of Pakistan. A businessman from Hunza said that Baloch terrorists committed bombings by indications of Indian government. Hunza people also hate China but have never sympathy to BLA's attacks to China. Those who were close to the government reacted like Pakistanis. A official of Balochistan Awami party said BLA was terrorist and foreign proxy. The party is a branch of the Muslim League that led Pakistan for long time. His opinion was same like that of supporters of the federal government. India is likely to offer safe haven for them. A Baloch politician said that the headquarter of BLA was in India. Commanders of BLA ordered militans via satellite phones. It doesn't mean they are puppets of India .India just supports an enemy of enemy. Pakistan supports Khalistan movement that seeks Shik independent too. Foreign proxy is good word to excuse to silence on requirements of Baloch. Baloch people oppose terrorism. I didn't feel so much sympathies to BLA's military struggle.  Popular reactions were that BLA was understandable but peaceful way was better.

Gwadar is the heart of CPEC. China got a 100 years' leases. It is almost overseas territory of China.

Baloch nationalists have tried to attack symbol of Chinese ambition. Chinese companies are most important targets for Baloch nationalists. Despite such situations, Pakistani government dreams Gwadar will become Dubai of south Asia. Pakistani news paper posted  articles about trip to Gwadar. Some local travel agencies held tours in Gwadar. I sent message to one of them. It replied 'now we don't hold Gwadar tour'. It was due to a massacre on the Makran highway in 18, April. Coast Guards checked every vehicle going to Gwadar. 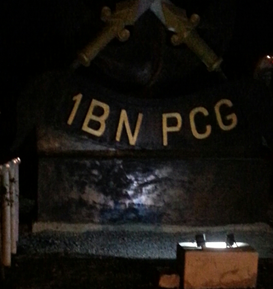 A check point of Pakistan Coast Guard on the Makran Highway

Foreigners can't enter in Gwadar. But it was possible to know local situations from people had jobs in Quetta. Buses to Gwadar departed from a bus terminal in suburb of Karachi. Many local people who were going to Gwadar gathered at the bus terminal. Every passenger had certificates issued by an authority in Karachi. Real face of Gwadar might be far from Dubai. A businessman expressed Gwadar as big jail. Every person from outside can't go out without military escort. Mostly targeted Chinese people are protected heavily. They can't enjoy their lives in green zone but live like prisoners.

Pakistan authority is said to use Islamic terrorists for attacking minorities. Pakistan is notorious to use Islamic terrorists as proxy. Recent example is Jaish-e-Mohammad(JeM). JeM is supposed to be created by Pakistan intelligence. JeM committed suicide bombing to Indian troops in the February and caused tension with India. National Party official Asif John said Daesh was active in Pakistan and Pakistan security has done nothing against it. Christians have been most targeted. In Dec, 2017 9 people were dead and 56 people injured in a church bombing in Quetta. He is also Christian Baloch. According to a report, Afgan Daesh existes around border areas close to Quetta. There is no doubt that some of them flow into Quetta.

What is the future of Balochistan and China?

Baloch people have the right of self determination. If they have equal rights and economic situations, even Baloch nationalists would be ready to abandon an option of independence. Actually most of them hope to coexist with other ethnic groups in the federation. Not only repression of Pakistan there are problems among them. In order to get real autonomy, they must unite. So far it is difficult . They are divided by languages, areas, tribes. Big problem is that there is no official common Baloch language. In Baloch, Chonay or Chone is common greeting that means "How are you?". But some Baloches looked confused when I said these phrases. Even greetings are not common. Tribal system is still powerful. Baloch people stand by political groups that are close to their tribes or families. Political leaders often dispute each other due to same reason. Therefore Political groups tend to be separated. But rage against China may let them unite. Though Baloch people are divided, they share the same rage. Attacks on people and sites related to China will never end. China will sink in swamp much deeper as long as Chinese businesses proceed in Balochistan.