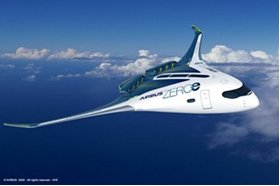 In Europe, including in the fields of aircraft and automobiles, there is currently a noticeable movement to develop technology, promote project, and collaborate on hydrogen energy.

In the aircraft sector, the UK's ZeroAvia revealed at the end of September that it had carried out the flight of a commercial airliner with a hydrogen fuel cell (HFC). ZeroAvia conducted a flight test of 6 seats at its Research and Development (R&D) facility in Cranfield, UK. The company said it would be the world's first HFC flight.

On September 21, aviation giant Airbus announced a zero-emission aircraft project, stressing that the energy source will be hydrogen in the concept of three commercial aircraft that could start operating by 2035.(Pictured is reprinted from Airbus's official website)

In the automotive industry, Total Carbon Neutrality Ventures announced on October 9 that it has agreed to invest in a hydrogen fuel cell (HFC) commercial vehicle business with U.S. fuel cell vehicle manufacturer HYZON Motors. HYZON is a manufacturer of HFC heavy trucks and buses that are separated from Horizon Fuel Cell Technologies in Singapore.

Royal Dutch Shell announced at the end of September that it would promote a hydrogen project in Germany. The company will increase the production capacity of water electrolyzed hydrogen at the Rhineland refinery by 10 times the current capacity. By 2030, the company plans to install 1,000 fast-charging points at gas stations and expand its resource recycling business at the Rhineland refinery.

Hungary's MOL announced on September 15 that it will introduce hydrogen recovery and refining facilities from exhaust gas from Frames at the Danube refinery in Saazhalombatta, Pesut Province, located in the country's middle north.

Poland's PKN Orlen announced in mid-September that it had announced that it started bidding for a contractor for a hydrogen hub construction project. It will be built in Vłławavek, Cuyavi-Pomoje province, central Poland. The production capacity of the hydrogen hub is expected to eventually be 600 kg/hour. The project will be positioned as a business related to PKN Orlen's carbon neutral strategy.

Air Products, the world's largest hydrogen producer, announced at the end of September that it had joined the Hydrogen Alliance (ECH2A) established by the European Commission (EC). The company's membership is expected to play an important role in ECH2A's low-carbon hydrogen production, transportation and delivery sectors.

By the way, it has been pointed out that the establishment of the market system contributes as a help to succeed in the hydrogen business, too. "A Hydrogen Exchange for the Climate," a report by the Dutch Ministry of Economy and Climate Policy, analyzed that the establishment of a trading market system would be of mutual benefit to those involved in the hydrogen business. In response, Dutch natural gas giant Gasney and four port authorities have started designing a trading system.