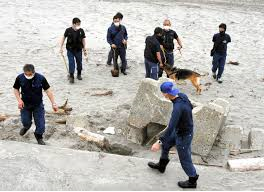 Five people were killed in a mudslide at a mine in San Lorenso, in northwestern Ecuador, close to the border with Colombia, on November 18, burying them in earth and sand. It sounds like an accident everywhere on a global scale, but the reason why this mudslide was short but international news was that the site was a mine that was illegally mining.

According to the New York Times, Reuters and others, the mudslide occurred in a huge hole dug up. At the time, 20 people were working, but four women and a 12-year-old child died after burying them in earth and sand. The mining hole at the site was about 70 meters in diameter and 40 meters deep, and the collapsed earth and sand was 40 cubic meters, according to local media. It is said that the heavy machinery for drilling at the bottom of this hole was almost buried in earth and sand.

Gold and copper were mined at the illegal mine, and it is likely that the mudslide was caused by the continued work ignoring safety.

Illegal mining of underground resources began in the 1990s and has become a social problem in South America. Because criminal groups are also organizing, the authorities' crackdown has not been effective, and it is said that “the current situation is the worst”.

Gold is at the center of illegal mining. Humanity has mined only two swimming pools for the Olympics in the past 6,000 years, but about three-quarter of the gold buried on earth has already been dug up.

Gold, on the other hand, is in high demand for jewelry, electronics, and financial products. Central banks in each country also hold gold for national finances, which is a huge buyer.

Gold's "consumption" is twice as high as it was in 1970, but gold prices continue to soar as supply is reduced and demand is increasing.

There is no way that criminal groups can miss it. In South America in particular, there are many gold veins that have not yet been dug out, so illegal mining has spread and "grown" as a huge black business.

At least 2,312 illegal mines appear to exist in Brazil, Peru, Bolivia, Colombia, Venezuela and Ecuador out of the nine countries and regions that make up the Amazon rainforest, according to data compiled by environmental groups based on satellite photos and testimonies from residents and journalists. In other Guyana, French Guiana, and Suriname, there is no data and numbers cannot be drawn out, but illegal mining is also carried out here.

It is estimated that about 90% of gold's production is illegally mined in Venezuela, about 80% in Colombia, and about 75% in Ecuador, and it has been distributed all over the world, just like gold dug regularly. This is because if you refine it with those from other production areas, you will not know the mining area.

Organized crime groups have mainly reduced the production and smuggling of drugs such as cocaine, but in Colombia and Peru, the income earned from illegal mining of gold is said to exceed the income from drug trafficking. Gold has an overwhelmingly smaller risk of manufacturing and transportation than narcotics under siege around the world.

Colombia's rebel group, the Revolutionary Armed Forces of Colombia (FARC), is deeply involved in the illegal mining of gold not only in Colombia, but also in Ecuador and Peru. It reached a peace agreement with the Colombian government in 2016, but scrapped the agreement last year. Even in the midst of peace, they were involved in illegal mining and now plays a wide-ranging and central role.

When it comes to illegal mining, the image of some people gathering at the site and doing it is only springs, but the actual situation is not such. Illegal mining creates a town. Roads are laid in dense forests, poor people are gathered from various places, they live, and they are made to engage in harsh work every day. In addition to restaurants and general stores, brothels are also set up. Many residents have been kicked out of their original settlements for illegal mining and are reluctant to work at illegal mining sites in poverty.

Large-scale mining harvests valuable rainforests and flows harmful substances into rivers. The destruction of the surrounding environment is immeasurable and has become a major environmental problem.

Harsh labor is also a serious human rights crackdown. Engage in dangerous and dirty work without sufficient knowledge. Powdered ore containing mercury is treated without protective supplies such as masks, and health hazards are also enormous.

Human trafficking is a common practice to attract workers and prostitutes. Forced labor of children has also become the normal. When he was young, he was made to work in equipment maintenance and restaurants, such as each tire change, and when he became a teenager, he was put into the most dangerous work because he became physically strong.

Between 450 and 600 children are being made to work at illegal mining sites in Atako, central Colombia, conservation groups and others have pointed out.

Criminal groups are heavily armed, threatening people with violence and monitoring them so they can't escape. Therefore, the realities do not come out easily in the table.

In July 2019, the Ecuadorian government launched a major crackdown on 2,400 troops and police in Ecuador's Buenos Aires district, close to the border with Colombia. Ecuador, an oil-producing country, plans to move away from its oil- relying economy and make gold, diamonds, rare metals and other underground resources a pillar of its national economy. Since 2017, illegal miners have entered the Buenos Aires area, which is believed to have a strong vein. Illegal mining expanded day by day. The Ecuadorian government had to stop illegal mining here because of the state's finances.

The militants who were in charge of illegal mining have also been removed, ending a government crackdown, but residents do not believe this will eliminate illegal mining. Corruption is widely charged with government officials, military personnel, and police officers. Corruption is attached not only to Ecuador but also to Latin America as a whole as a constitution. Most good Latin American citizens recognize that the fight against organized crime, which deprives them of resources and destroys the environment, is a path of extreme hardship, but their greatest enemy is a "lack of morals."

His coverage is a wide range of coverage from town stories to international affairs, specializes in economics, diplomacy, North America, Latin America, South Pacific, Organized Crime, and Terrorism.  His hobby is driving around the world.