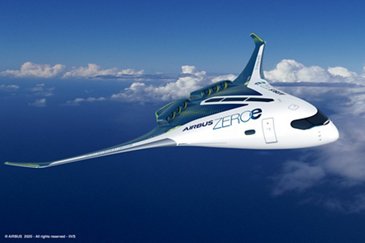 With the global need for zero emissions, an initiative for the global environment, the International Energy Agency (IEA) recently announced that it has evaluated more than 800 technology options by 2070 to reach net zero carbon dioxide (CO2) emissions from energy systems at Energy Technology Perspectives 2020.

As a result, they stressed that reductions are needed in the power generation sector as well as in the transportation, industrial and construction sectors, which currently account for 55% of CO2 emissions, in order to achieve the target. (The photo is reprinted from Airbus's official website)

In the automotive sector, there is a movement toward zero emissions. Each of the four continents agreed on The Global Commercial Vehicle Drive to Zero (Drive to Zero) program, a consortium of nine countries on four continents that will jointly work on the manufacture, infrastructure development and dissemination of commercial vehicles, each of which was held at the Clean Energy Ministers' Meeting (CEM11) in late September. In addition to Japan, Canada, China, Chile, Finland, Germany, the Netherlands, Norway and Sweden will participate.

In the logistics sector, DEUTSCHE POST's DHL Global Forwarding announced that from January 1, 2021, it will make cargo (LCL) sea freight below containers carbon neutral. Deutsche Post-DHL Group has decided on a policy of zero greenhouse gas (GHG) emissions by 2050.

In the energy industry, PKN ORLEN, Poland's largest oil company, announced in early September that it would achieve carbon neutrality by 2050. By 2030, the company will refine CO2 emissions, reduce petrochemicals by 20 percent, and reduce power generation by 33 percent (MWh). To achieve this goal, PKN ORLEN plans to invest PLN 25 billion (approximately $6.67 billion) in environmental measures by 2030.

In addition, aerospace defense company Airbus announced a zero-emission aircraft project at the end of September. Under the concept of three commercial aircraft that can start operation by 2035, the energy source will be hydrogen, and the company wants to put it to practical use by 2035.

Airbus’s Chief Executive Officer (CEO) Guillaume Faury called it a "historic moment" and commented that it "has great potential to significantly reduce the impact of aircraft on climate change."

However, in order to put zero emissions into practical use, infrastructure development for refuelling is required, and it is important to secure investment amounts and financial resources for research and development.

In mid-September, the Energy Transition Commission (ETC), a think tank, said in its "Making Mission Possible Delivering-a-Net-Zero Economy" report, "Clean power is a key to achieving net zero globally by around 2050. The amount of investment required is $1~2 trillion/year, equivalent to 1-1.5% of the world's gross domestic product."