Lithium power Bolivia is shaking! The shadow of Tesla in the distant cause 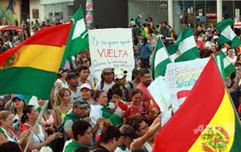 Former President Morales, who was forced into exile as a "coup", announced his return to his country, and Bolivia became a strong anti-American leftist government again.

The U.S.-backed conservative interim government has collapsed. However, just before the Presidential election, a new coup plan runs around the world, and even after the election, it is still in a disturbing atmosphere. Electric car maker Tesla’s CEO, Elon Musk openly agreed to overthrow Morales only in Bolivia, where huge lithium resources sleep, and the opposition to Western capital of the indigenous people intensified, casting a dark shadow on the resource struggle after the new corona pandemic.

The official result of the Presidential election held on the 18th of this month was announced on the 23rd, and the left-wing party, Luis Arce of the Socialist Movement (MAS), won. The voter turnout was 55%, overwhelming other candidates such as former President Carlos Mesa of the Middle Way, and the game was decided without a final vote.

Arce was an economist who studied at Warwick University in the U.K. and was Minister of Economy and Finance during the 14-year reign of former President Morales as the first indigenous President. He is responsible for the Morales administration’s economy policy towards poverty alleviation, benefiting from underground resources. During the Morales administration, the Bolivian economy grew rapidly due to rising resource prices.

Gross domestic product (GDP) per capita has tripled and poverty’s ratio has fallen from 60% to 35%. The people, in particular the indigenous people, have a lot of trust in Mr. Arce. His political stance was said to be more moderate than former President Morales, and after deciding to win, he appealed for the reconciliation of all the people.

Bolivia is also referred to as "the Last Hideout for Outlaws"

The U.S. gangsters Batch Cassidy and Sundance Kid, who modeled the movie ‘Butch Cassidy and Tomorrow”, co-starring Paul Newman and Robert Redford, hid in Bolivia in November 1908 in the South.They died in the rural town of San Vicente.

Revolutionary Che Guevara was executed in October 1967 after Bolivia became the last battleground and was secured by the CIA-backed Bolivian army in the central village of Higuera. Klaus Barbie, a former German Hauptsturmführer, is said to have been involved in the execution of Che Guevara. He was later involved in a military coup.

Just lightly unraveling a world-famous case is like this. Bolivia, which became independent in 195 years, is constantly suffering from political unrest that connects with the world due to its poverty and the special terrain of the inland. At least 13 of the 65 presidents up to President Morales are said to have died in violent acts.

In addition, it is said that there were 190 times of what we called “coup” or “coup plan” and “revolution” among experts, but during the past year over the Presidential election, “coup” and “coup plan” is once each, and the number of “symbols of instability” is 192 times.

In the Presidential election last October, President Morales ran for virtually ignoring the constitution banning four elections. He once declared victory, but the Organization of American States (OAS) election monitoring team claimed that the election was fraudulent and called for the presidential election to be redone.

Later, President Morales resigned as the army rebelled against President Morales. He fled to Mexico as the white elite, who established the interim government, set out to arrest Morales. Morales and indigenous people and other Morales supporters strongly opposed it as a "US coup aimed at lithium interests."

In fact, there was something unnatural

After voting, an unknown system’s engineer suddenly appeared on TV, analyzing voting behavior and pointing out fraud. Morales believed the system engineer is linked to OAS, which is headquartered in Washington, D.C.

His interim administration was led by female Senator and lawyer Jeanine Anez. Although she is a former TV hostess and has a gorgeous career, she is a pioneer of anti-Morales, but she has no political presence until then, and Bolivian people have a strong impression that she suddenly appeared in the interim administration.

The Anez administration broke up with anti-American countries such as Venezuela, and changed all the policies of the Morales administration, such as expulsion of Cuban doctors, aiming to restore the white elite. It also removed restrictions on the use of firearms by the military and police to maintain security.

For this reason, a lot of blood was shed in the clash between the military and police, and the Indio who oppose the road blockade and demonstrations. The hard-line measures of the Anez administration have led to international criticism as well as Morales, and the Washington Post and The New York Times have accused them of harsh tone.

On the other hand, Ms. Anez lost her centripetal force as scandals and line conflicts surfaced within the interim administration and ministers resigned one after another. The re-election schedule was postponed twice due to the spread of the new corona pandemic, but although Ms. Anez announced her candidacy for the presidential election, which was finally held, she was unpopular in the polls and was on the way. She declined.

And another person who was noticed in the turmoil in Bolivia over the past year was electric car maker Tesla's Elon Musk. This is because in July of this year, Mr. Morales posted a message on Twitter in favor of a "coup" about his asylum abroad.

“We will coup whoever we want! Deal with it”

"No matter who we are, if we want to have a coup, we do it! Don't mess around." Lithium, which sleeps a lot in Bolivia, is indispensable for manufacturing batteries for electric vehicles (EV). Tesla has a keen eye on Bolivia, which is reflected in this message from the top.

Indigenous peoples in Bolivia accused Mr. Musk of “imperialism”. Following the revival of the left-wing government, criticism has been raised not only in Bolivia but also in western liberals.

In the re-election on the 18th of this month, six days before the election day, the British left-wing tabloid paper “Morning Sun” published an article that details of a new coup plan in Bolivia were revealed.

After last year’s vote, a system engineer who suddenly appeared on TV manipulated the voting data, and another organization confused the country by setting a bomb at the hotel where the election monitoring team is staying. The scenario is that the constitution will be suspended temporarily, blocking the victory of the left-wing and officially establishing a conservative government. It was feared that the opposing indigenous people would be significantly sacrificed.

This is the 192nd "symbol of instability" in Bolivia

There was no actual “coup”, but Morales, who had moved from Mexico to Argentina, announced that he would return to Bolivia. Mr. Morales has the longest reign in Bolivia’s history. If the charisma with such influence return to Bolivia, it is inevitable that the anti-American left will gain more momentum, and western investors will be uniformly confused.

In neighboring Chile, the anti-government activities by citizens since last year have become even sharper, and the movement has developed to demand a constitutional amendment from the time of the Pinochet dictatorship. In Argentina, which suffers from a chronic currency crisis, the rapid spread of the new corona has left about half of the population in poverty.

Bolivia, Chile, and Argentina are representative production areas and resource-rich countries for lithium, which are indispensable in the renewable energy era, and form a resource zone called the "lithium triangle". In both cases, the domestic division has become more serious due to social unrest, and the battle for lithium after the new corona will change significantly depending on the political and economic conditions of the three countries.

His coverage is a wide range of coverage from town stories to international affairs, specializes in economics, diplomacy, North America, Latin America, South Pacific, Organized Crime, and Terrorism.  His hobby is driving around the world.